From Rlyehwiki
Jump to navigation Jump to search
< Armor 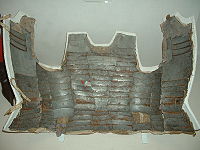 Brigandine is a form of armor in 5th edition Dungeons & Dragons.

Brigandine Armor
Brigadine armor is overlapping metal plates riveted to a heavy cloth covering. It covers the torso but not the arms. Howver, pauldrons and arm armor (rerebrace & vambrace) were not uncommon to be worn with briandine. It was worn over a gambeson (a padded undercoat, included in the weight and cost). It often buckled on, opening in the front, making it easier to don and doff by yourself than a breastplate. Its heavy cloth covering was often decorated making it fashionable.

It was easier (and cheaper) to construct (and repair) than a breastplate or split armor.

The name briandine came into use due to brigans often using it as it could often be mistaken for more civilian attire (hiding its armor nature).