From Rlyehwiki
Jump to navigation Jump to search

Not the article you were looking for?
See Dwarf (disambiguation)
< Race
D&D 5e SRD5 OGL ʰ 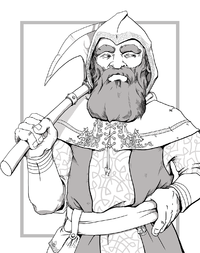 Dwarf is a playable race in 5th edition. A subrace should also be selected.

Your dwarf character has an assortment of inborn abilities, part and parcel of dwarven nature. name missing

Creature Type. Humanoid
Ability Score Increase. Constitution +2
Age. Dwarves mature at the same rate as humans, but they’re considered young until they reach the age of 50. On average, they live about 350 years.
Alignment. Most dwarves are lawful, believing firmly in the benefits of a well-­ordered society. They tend toward good as well, with a strong sense of fair play and a belief that everyone deserves to share in the benefits of a just order.
Size. Dwarves stand between 4 and 5 feet tall and average about 150 pounds. Your size is Medium.
Speed. Your base speed is 25 feet.
Darkvision. Accustomed to life underground, you have superior vision in dark and dim conditions. You can see in dim light within 60 feet of you as if it were bright light, and in darkness as if it were dim light. You can't discern color in darkness, only shades of gray.
Dwarven Resilience. You have advantage on saving throws against poison, and you have resistance against poison damage.
Dwarven Combat Training. You have proficiency with the battleaxe, handaxe, light hammer, and warhammer.
Tool Proficiency. You gain proficiency with the artisan’s tools of your choice: smith’s tools, brewer’s supplies, or mason’s tools.
Stonecunning. Whenever you make an Intelligence (History) check related to the origin of stonework, you are considered proficient in the History skill and add double your proficiency bonus to the check, instead of your normal proficiency bonus.
Languages. You can speak, read, and write Common and Dwarvish[[Category:5e {{{name}}}s]]

End of the SRD5 material

OGL
This is article is covered by the Open Game License v1.0a, rather than the Creative Commons Attribution Sharealike License. To distinguish it, these items will have this notice. If you see any page that contains OGL material and does not show this license statement, please contact an admin so that this license statement can be added. It is our intent to work within this license in good faith.
Retrieved from "https://wiki.rlyehable.com/index.php?title=SRD5:Dwarf&oldid=14130"
Categories: