Warning: is_dir(): open_basedir restriction in effect. File(C:\Windows\TEMP) is not within the allowed path(s): (h:\) in H:\root\home\rlyehable-001\www\rlyehable\w2\includes\libs\filebackend\fsfile\TempFSFile.php on line 90

Warning: is_dir(): open_basedir restriction in effect. File(C:\Windows\TEMP) is not within the allowed path(s): (h:\) in H:\root\home\rlyehable-001\www\rlyehable\w2\includes\libs\filebackend\fsfile\TempFSFile.php on line 90

Warning: is_dir(): open_basedir restriction in effect. File(C:\Windows\TEMP) is not within the allowed path(s): (h:\) in H:\root\home\rlyehable-001\www\rlyehable\w2\includes\libs\filebackend\fsfile\TempFSFile.php on line 90
 5e:Enkki - Rlyehwiki

From Rlyehwiki
Jump to navigation Jump to search
< Monster 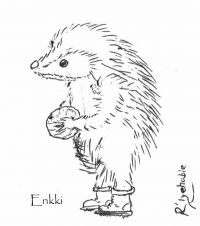 Enkki are small fey that appear to be anthropomorphic hedgehogs. They stand 2-3 feet tall and weigh 30-35 pounds. Their fur can range from gray to reddish-brown and the tips of their quills range from tan to white. Enkki wear little clothing, but do often have vanity items (boots, hat, vest, belt, or pouch).

They are natural sorcerers that draw on the Wild Magic. They also have the ability to imbue this magic temporarily into objects to make charms, fetishes, and potions.

Enkii are omnivores, being able to sustain themselves on both plant and animal matter, but they prefer meat (especially that of large insects and worms, if available).

At least two versions of history give different reasons for the Enkki to have left the Feywild.

The first was that they left to learn the full depth, length and breadth of the source of magic (known as The Weave in Faerûn). This pilgrimage has lasted for eons, and may never end as magic seems to keep changing.

The second was that their drawing on Wild Magic, and its side-effects, caused such a disruption that the Queen of Winter banished them from the Feywild until they learned all that can be known about wild magic, how to fully control it, and report back to her the full sum of that knowledge.

Enkki divide themselves into small family groups. These groups are usually nomadic, traveling from town to town. Often they will pull their small wagons into a circle outside of town. In town they usually sell small magic charms, tell stories, and preform magic tricks to earn coin for any supplies they need. If there is a Sorcerer or Wizardry school, they will often visit them to gain knowledge (see The Quest (above)).

They are fiercely loyal to their families, of which there are generally a good number of cubs. The cubs often will outnumber the adults by a large factor. However, if a group exceeds 30 adults, the group will often divide and go separate ways. Different family groups are usually cordial with each other, sharing knowledge and cross-referencing notes. However, sometimes there is territorial conflicts.

Their wagons are often pulled by Giant Fire Beetles, which the Enkki breed for the purpose.

Wild Magic. When an Enkki casts a spell of 1st level or higher, roll a d20. On the result of 1, roll on the Wild Magic Surge table on p.104 PHB 5e or you can use the Abbreviated Wild Magic Surge Table (below).

Magical Advantage. The Enkki can use gain advantage on one attack roll, ability check, or saving throw. The enkki cannot use this ability again until it finishes a Long Rest or uses a spell of 1st-level or higher.

Sense Magic. Enkki can sense magic within 30 feet of themselves. If they use an action to concentrate on the magic, they can determine its school, if any.

Fey Minds. Enkki have advantage on saving throws against enchantment spells and magic.

Quills. A melee attack made by an unarmed strike or natural weapon (such as a claw or bite) or an undesired Touch range spell will take 1d4 piercing damage. In addition, melee weapon attack against them that rolls a natural 1 will also cause the attacker to take this damage.