From Rlyehwiki
Jump to navigation Jump to search 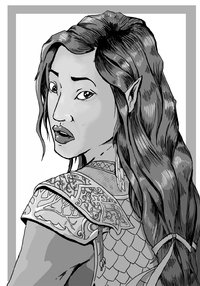 Elf is a playable race in 5th edtion. A subrace should also be selected.

Your elf character has a variety of natural abilities, the result of thousands of years of elven refinement.

Creature Type. Humanoid, Elf
Ability Score Increase. Dexterity +2
Age. Although elves reach physical maturity at about the same age as humans, the elven understanding of adulthood goes beyond physical growth to encompass worldly experience. An elf typically claims adulthood and an adult name around the age of 100 and can live to be 750 years old.
Alignment. Elves love freedom, variety, and self-­expression, so they lean strongly toward the gentler aspects of chaos. They value and protect others’ freedom as well as their own, and they are more often good than not.
Size. Elves range from under 5 to over 6 feet tall and have slender builds. Your size is Medium.
Speed. Your base speed is 30 feet.
Darkvision. Accustomed to twilit forests and the night sky, you have superior vision in dark and dim conditions. You can see in dim light within 60 feet of you as if it were bright light, and in darkness as if it were dim light. You can't discern color in darkness, only shades of gray.
Keen Senses. You have proficiency in the Perception skill.
Fey Ancestry. You have advantage on saving throws against being charmed, and magic can’t put you to sleep.
Trance. Elves don’t need to sleep. Instead, they meditate deeply, remaining semiconscious, for 4 hours a day. (The Common word for such meditation is “trance.”) While meditating, you can dream after a fashion; such dreams are actually mental exercises that have become reflexive through years of practice. After resting in this way, you gain the same benefit that a human does from 8 hours of sleep.
Languages. You can speak, read, and write Common and Elvish

End of the SRD5 material

OGL
This is article is covered by the Open Game License v1.0a, rather than the Creative Commons Attribution Sharealike License. To distinguish it, these items will have this notice. If you see any page that contains OGL material and does not show this license statement, please contact an admin so that this license statement can be added. It is our intent to work within this license in good faith.